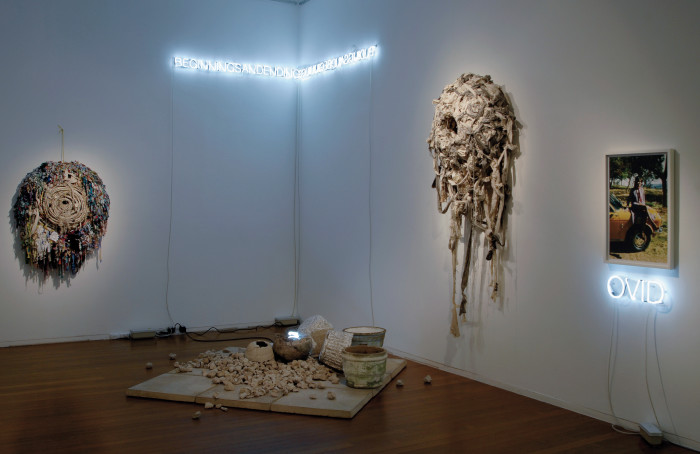 I
Beginnings and endings/endings and beginnings… Indecision is an unfortunate trait of mine. I’m terrible at completing things, let alone starting them. I put things off for weeks, dumbstruck with inertia, never confident or quite sure what to do. In part, the title, Fish or Cut Bait?, is a reference to this. It’s also true I’m a keen angler and grew up bagging Kingies from the North Bondi cliffs and Bronte cemetery, though this fact has no influence. The title may also be read as a kind of vernacular response to Che fare? (what to do?).

II
I first encountered the adage Fish or Cut Bait? eighteen years ago as a teenager thumbing through a book of funnies by Gary Larson. I remember the day well, as earlier that afternoon I’d made an impromptu decision to drop out of school. I was in year eleven at the time, experiencing hormonal overdrive and teen love gone badly wrong. This, coupled with the pressures of flunking 2C mathematics (again) had broken the camel’s back. Arriving home alone, depressed, I tried to cheer myself up paging through mum’s boyfriend’s stack of Larson books on the sofa. The hilarious image of a crazed angler, inert with indecision and a caption reading, ‘How fishermen go crazy… fish or cut bait, fish or cut bait?’ has stuck with me ever since.

III
Travelling through China in ’98, a Mongolian fortune-teller told me the best talisman for indecision was to act through repetition; to learn through repetitive processes; to keep things simple and observe the cycles in all things. This advice I continue to heed, despite being scammed fifty bucks. The repetition of simple acts: tying, binding, squeezing, moulding, wrapping etc., are underlying principles behind much of the work. No power tools, fancy methods or big ideas were involved. Neon aside, the choice of materials is basic, domestic even: string, pulped newspapers, garden pavers, doormats and crotched doilies, some of which I commissioned to my close friend Max Lieberman’s Indian wife, Preeti.

IV
For elderly ‘Cape Coloured’ women doily making is a popular pastime. The women of my family are no exception and my Nan delights in making them. I live with a personal collection of her items. On return from a stint in South Africa, late 2006, I’d suffered from doily overload. During tiresome stays with old Aunties’ one could not escape the domestic invasion of petite handicrafts. Doilies adorned almost every conceivable nook, cranny and inanimate object. Not just coffee or dining tables – but toasters, kettles, hot plates, vacuum sealed settees and cushions; in bathrooms, on toilet seats, tissue boxes and under sickly looking indoor plants. Aunt Sybil even had one splayed across her old Corolla dashboard. Staying with Aunt Alice in the township of Bishop Lavis, I recall her using one as a placemat for her ‘stable table’. From this arrangement she ate afternoon sweetmeats and Borewors (‘farmer’s sausage’). She’d do this daily, watching bad Afrikaans soaps from bed. Everything in her modest home was garnished with assorted beaded or crocheted adornments. This soft environment gave a warm touch to her abode and contrasted the occasional gunfire I’d hear at night.

V
On the island of Nguna, my good mate Jack Siviu Martau’s Aunty Janet wiles away her hours making ‘Mother Hubbard’ dresses. The dresses are lovingly fashioned from breezy Pacific calico, floral in colour and design. The off-cuts of material are used to make patch-work style curtains, carry bags and doormats. Nothing is wasted. While staying with Aunt Janet a few months back I picked up a couple of her doormats. Coincidentally, they make an appearance in one of the works.

Newell Harry’s work is held by Newcastle Region Art Gallery, Queensland Art Gallery, Wollongong University, Artbank and the Ergas Collection as well as a number of private collections in Australia. He is included in the new Art and Australia publication Current: Contemporary Art from Australia and New Zealand to be published in October 2008. Fish or Cut Bait? Is Newell Harry’s second solo exhibition with Roslyn Oxley9 Gallery.