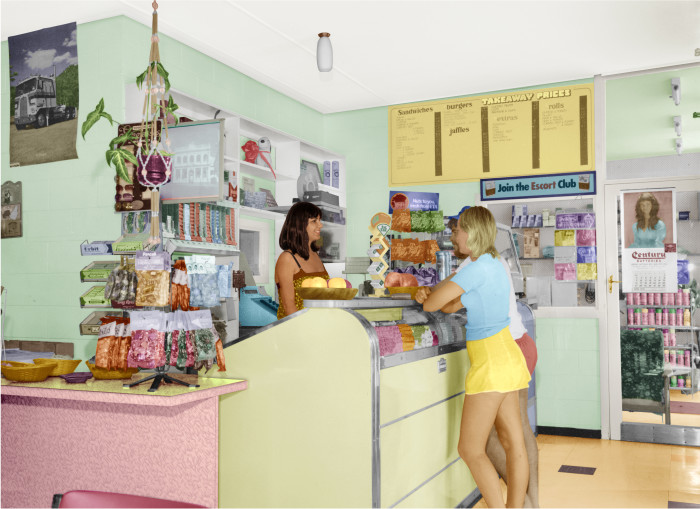 Over the years my friends and I joke about our dreadful past jobs. Jobs we worked as teenagers and young students. Awful jobs that we would rather forget about such as cleaning out the local cinema after a screening of The Exorcist in 1974.

When I was a kid I always had jobs and I always made my own money whether it was receiving a dollar for pulling up the weeds in the yard or baby sitting for neighbours or working at the local green grocers. The thing about making a bit of your own cash was that you could buy your own clothes and not have to wear the clothes that your mother picked out.

In 1978 at seventeen I worked in factories peeling pineapples. I also packed meat and shelled prawns. Such back breaking labour was exhausting but the money was good.  After one year I saved enough money to travel to Europe and backpacked around for nine months. Then in 1980 I went to art school in Brisbane but continued part-time work as a waitress to pay for art materials.

After art school I was desperate for money to pay the rent and I worked many jobs. Some were: scrubbing floors in a women’s refuge, washing dishes in a canteen and parking cars in a car park beneath a restaurant called Dirty Dicks (I had no driver’s licence, but the patrons were always drunk and didn’t care.)

I am resentful and appalled at the work I had to do to survive. I hold a grudge towards rich kids who never had to slave like I did. Secretly though I’m proud of myself. When I think of those early years I realize that I was learning to be tough and work whether I liked it or not. I put my head down and was forced to be productive. I was learning how to get on with other people and learning to handle a boss. These days I do nothing but make art and have exhibitions. Being an artist feels like being on a permanent but jittery holiday in comparison to those early working days. Now I sleep in until 9.30am and press the ‘ignore’ button on my phone if I don’t feel like talking to anyone. But, as Bette Davis put it, it is ‘The Lonely Life’. You have come up with the ideas and make them happen. No-one else is going to do it for you.

But I remember the good things about the factory floor. Walking into work everyday and saying hi to people you knew, there was a camaraderie. The work was mindless but it didn’t mean that your mind couldn’t go places. Then there was knock-off time. The bell would ring and you would be out the door with a wad of cash in your hand and not a care in the world.

In being a full-time artist there never is any knock-off time. There’s always a nagging, miserable voice of ideas in your head and you MUST get up off the sofa and produce work. The bell never rings and you never know where your next buck is coming from.  Your mind is constantly wound up. You’re never really physically tired not like when you had a real honest job. But would I go back to working in a factory just to get good a night’s sleep? Ha, um, no.

Tracey Moffatt is one of Australia’s leading contemporary artists. Since her first solo exhibition in Sydney in 1989, she has had numerous solo exhibitions in major museums around the world. Working in photography, film and video, Moffatt first gained significant critical acclaim when her short film ‘Night Cries’ was selected for official competition at the 1990 Cannes Film Festival. Her first feature film, ‘beDevil’, was also selected for Cannes in 1993. In 1997, she was invited to exhibit in the Aperto section of the Venice Biennale. A major exhibition of Moffatt’s work was held at the Dia Center for the Arts in New York in 1997/98 which consolidated her international reputation. Recently, comprehensive survey exhibitions of Moffatt’s work have been held at the Museum of Contemporary Art, Sydney and the Hasselblad Centre in Goteburg, Sweden. In 2007 a new monograph, ‘The Moving Images of Tracey Moffatt’, was published by Charta Publishers, Milan. Tracey Moffatt was the recipient of the 2007 Infinity Award for art by the International Center of Photography, New York. Infinity Awards are given for outstanding achievements in photography by honoring individuals with distinguished careers in the field and by identifying future luminaries.