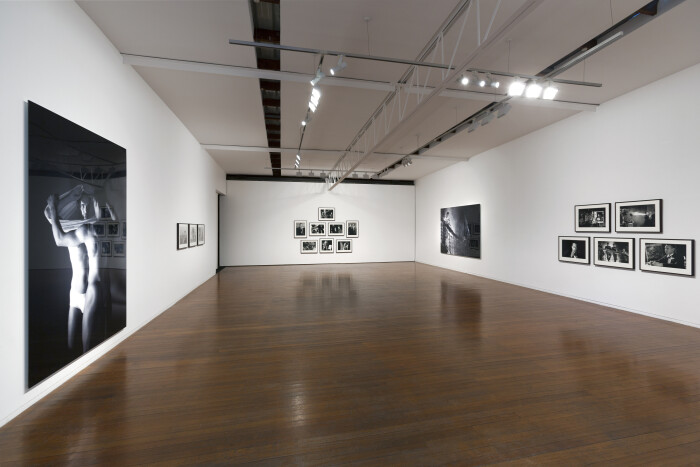 Isaac Julien CBE is one of Britain’s most influential and critically acclaimed artists working today known for pioneering multi-screen installations. Julien recently received the Charles Wollaston Award (2017), for the most distinguished work at the Royal Academy Summer Exhibition and was awarded the title Commander of the Most Excellent Order of the British Empire (CBE) in the Queen’s birthday honours, 2017 for his contribution to art.

Presented from 23 January until 3 March 2018, the exhibition features Julien’s award-winning film Looking for Langston (1989), which will be presented as part of the solo exhibition of his newly conceived, large-scale photographs as well as original silver gelatin photographic works.

Looking for Langston (1989), shot in sumptuous monochrome, is a lyrical exploration of the private world Langston Hughes (1902 – 1967) and his fellow black artists and writers who formed the Harlem Renaissance during the 1920s.

Directed by Julien while he was a member of Sankofa Film and Video Collective, and assisted by the film critic and curator Mark Nash, the 1989 film is a landmark in the exploration of artistic expression, the nature of desire and the reciprocity of the gaze, and would become the hallmark of what B. Ruby Rich named New Queer Cinema.

For his photographs, Julien often works with advanced pre- and post-production technologies. To create the large-scale photographic works, he has used both digital and analogue techniques to create an immersive, cinematic experience. In addition, smaller photographic works from the Looking for Langston Vintage Series will be displayed in their original form as silver gelatin works printed on Ilford paper. All are renderings of the visual components that might be missed in a fleeting filmic image.

The presentations expand upon the artist’s unique engagement with an ever-shifting visual culture. Throughout his career, Julien has worked simultaneously with photographers and cinematographers to make still and moving picture artworks. Working with Nina Kellgren (cinematographer) and Sunil Gupta (photographer), Julien shot Looking for Langston in the 1980s in London but set it in the jazz world of 1920s Harlem. His use of low-key lighting and sculptural smoke further complicate historical periodisation, infusing the work with a 1940s film noir feel. The imaginative combination of epochs creates a kind of ‘creolisation’ of photographic forms as well as a potent and self-conscious timelessness. While Julien was directing the film, he paid close attention to the photographs of James Van der Zee, George Platt Lynes and Robert Mapplethorpe, and it is possible to see a direct relation between images imbued with references to the history of 1930s black-and-white African American photography and 1980s Queer cultures.

Looking for Langston was made when the AIDS crisis was at its height and several of its actors died after the film was made, including Matthew Baidoo (Beauty, after the Bruce Nugent poem Smoke, Lilies and Jade), Ben Ellison (Alex, the young Langston Hughes character) and Jon Iwenjiora (Dancer at Wake, who appears in Pas de Deux). For Julien, the photographs act as ‘memorial sites’. Sometimes they reveal facts behind his fictions and explore the creative process, at other times they zero in on a portrait or go deeper into a moment of contested history. Whatever the case, Julien is unapologetic about his pursuit of beauty and the importance of visual pleasure as an entry point to any exploration of subtextual issues.

The film earned Julien a cult following and its focus on a Black, Queer experience within the American cultural landscape retains its urgency and relevance regarded as a touchstone for Cultural Studies and has been taught widely in North American and Australian universities, colleges and art schools for nearly 30 years. Julien has recently worked to conserve and restore the images of the 16mm film from his extensive archive. The newly conserved film was recently shown at both MoMA New York and Tate Britain in 2017 before coming to Sydney.

Julien is the recipient of the James Robert Brudner ‘83 Memorial Prize and Lecture at Yale University (2016). Most recently he received the Charles Wollaston Award (2017), for most distinguished work at the Royal Academy Summer Exhibition and in 2018 he was made a Royal Academician. He was awarded the title Commander of the Most Excellent Order of the British Empire (CBE) in the Queen’s birthday honours, 2017.