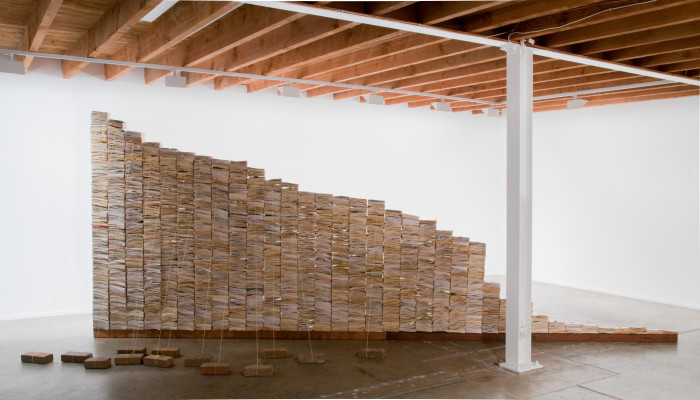 When I was little, I thought that I was god and that the earth was a tennis ball with which fate played, a small thing in an enfolded cosmos. From the vantage point of my equivocally omniscient point of view, I could observe the world and all its things which sometimes appeared miniature and submitted to my will and which other times dwarfed and menaced me. This schematic framework related to both animate and inanimate things, as much to objects as to people and relationships. To reckon with our place in the world we require art and language. A simple example of this might be the figure of speech, “everything’s alright,” which paradoxically is voiced in moments of distress or when things aren’t going so well. It’s both a calmative and a qualitative judgement. A slogan for use when life’s a happening. Everything’s Alright is an exhibition of three artists whose highly accomplished work has had little exposure outside of artist-run-initiatives and student galleries.

At the age of eighteen, an alter ego called Ussef made itself known to Hossein Ghaemi. Born from the artist’s native Persian (Iranian) culture, Ussef appeared in the dress of a whirling dervish and provided Ghaemi with a close and benevolent ally. Ussef embodied traditional ideals and bestowed feelings of tranquillity and ecstasy upon his host. At age twenty two a second whirling dervish alter ego appeared to Ghaemi. This was Issiac. He had an electric fan for a head and was characterised by his faith in technology. Ussef and Issiac disputed over questions of ethics and philosophy and eventually, as an outcome of aggressive argument, became one harmonious identity. In his paintings, drawings and performance, Ghaemi uses a wide variety of media to represent these two identities – these others -- within himself. His installation of small jewel-like paintings and drawings, which combine traditional materials such as gouache and pencil with more surprising ones such as the artist’s blood, pistachio nuts and pomegranate juice, are representations of these identities. Embalmed in resin or drawn upon mirror, it is as though these submerged images (these egos) are mummified, waiting to be alive. Ghaemi also channels Ussef and Issiac by using the human voice as a conduit in his performance involving an acapella choir dressed in whirling dervish costume, Ussef/Issiac – which one is wearing the hat?.

Andrew Liversidge produces videos that document performance but has recently also exhibited sculpture. He uses the ready-to-hand accessories of habitual activity and daily necessity as both medium and subject of his work. The mess of life is abstracted and submitted to the rationalising processes of numerical systems by way of an arbitrary injection of meaning. Repetition, descriptive of life, instigative of boredom, furnishes material for counting and generates numbers which add up to answers of sorts.

A long-term relationship ends. For some years prior to this, as part of a systematic strategy of recuperation against an insipient sense of loss, Liversidge transcribed by hand every text message he received on his mobile phone. Consequently, it turned out he had every message she had ever sent him. To illustrate fluctuations in velocities -- tensions and conditions of equilibrium -- within the relationship, he plotted on a graph the number of syllables he received from her each day by SMS for the duration of their time together. The data was then extrapolated into three-dimensions and placed in the gallery in the form of a sculptural bar chart. Nothing for nothing is over two metres high and almost seven metres long and is constructed out of approximately two thousand pulp romance novels. A tragic tale of boy-loves-girl-boy-loses-girl which escalates to a dramatic end is graphically illustrated via another failed relationship – the relationship between empirical data and its supposedly rational system of interpretation.

A video, Clearing the mists, accompanies Liversidge’s monument to a climactic emotional trajectory. A man in a yellow boiler suit stands in a small boat, navigating the river with an oar and routinely tending the machinery on board. Pointing the rod of a large vacuum cleaner to the sky, he sucks up a descending and formless mass of cloud. A metaphysical rite which he is ordained to perform.

Yasmin Smith works with ceramic, altered found objects and is also a painter. Her surreal installation of giant corroded nails, If I could come near your beauty with my nails, penetrates the ceiling above and the floor beneath us like a forest of stalactites and stalagmites. Their near human scale draws out their inherent anthropomorphic qualities. This bent and aged community of somewhat caricatured figures goes beyond the surfaces that delimit the architecture that we inhabit to a space that is inaccessible to us. Another surprising aspect of these strange objects is their material construction. Rather than the rusted, hardened steel of which they appear to be made, they are in fact fired ceramic which the artist has patinated with copper and manganese. By using ceramic to represent metal, Smith initiates a dialogue between apparent strength and actual fragility.

Andrew Liversidge (b. 1979) completed his Masters of Fine Arts at the Victorian College of the Arts in 2009. He  had a solo exhibition at Melbourne’s TCB Gallery- In my mind I know what I think but that’s only based on my experience in 2009. The present work is part of his Masters graduation work and was also exhibited at King’s ARI in Melbourne in late 2009.

Yasmin Smith (b. 1984) is currently undertaking a Masters of Fine Art at Sydney College of the Arts. She is a co- director of the Sydney artist-run initiative Locksmith. If I could come near your beauty with my nails was first shown in a solo exhibition at Newspace Gallery in Sydney in 2006. She has undertaken a residency in Berlin as part of the Mattress Box Project and her work has appeared in several group exhibitions in student galleries and artists run initiatives. Smith is also a professional musician.