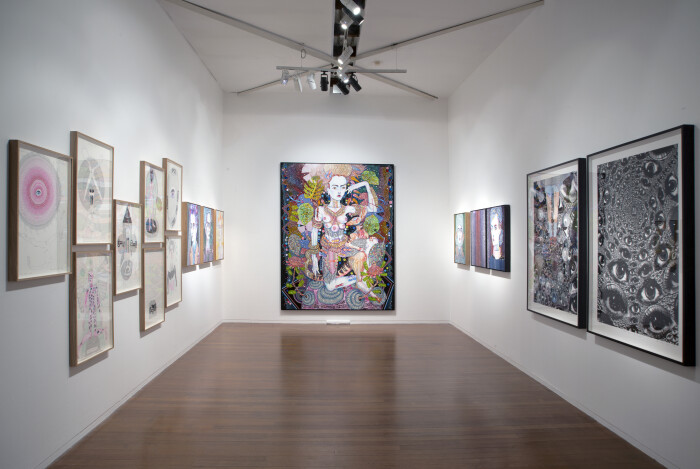 Driven by her curiosity, Del Kathryn Barton explores new mediums and technologies that connect to her symbolic language of femininity, folklore and the cosmos. This exhibition presents a new series of paintings, digital collages and drawings that take us on a journey to imagined worlds.

Del Kathryn Barton presents for the first time, digital collages constructed from images that reference familiar films and fairy tales. Drawn from her nostalgic memories, the references appear in her new work as fragmented reflections from her childhood, such as Dorothy’s red shoes in ‘The Wizard of Oz’, the swirling apparent endless rabbit hole in ‘Alice in Wonderland’ and the candied house from ‘Hansel and Gretel’.

Barton’s works are self referential, drawing from an emotional inner world of womanhood. The motifs, the colours and symbols in the works all bring attention to a natural force of intuition, self-reflection, sexuality and creation. This can be identified in the reoccurring motif of the ‘eye’, often viewed as a spiritual symbol that can be indicative of an awakening of consciousness. Barton’s drawings are expressive, highly detailed and laced with decorative motifs of domesticity, such as keys, corkscrews, scissors and houses. These symbols are elements, equally concerned with the traditions of everyday life.

The flora and fauna in Del Kathryn Barton paintings appear to coexist in an imagined universe populated by peculiar anthropomorphic creatures. These creatures resemble human beings that embody a deeply fierce feminine force. Whilst the flora can be identified as a part of the Australian bush, the landscape remains unidentified in time and space.

Del Kathryn Barton has been exhibiting since 1995. At the 2014 Adelaide Biennial: Dark Heart, Barton presented a nine metre, five panel painting alongside a companion moving image work. In 2013, Barton was awarded the Art Gallery of New South Wales’ Archibald Prize for the second time with a portrait of actor Hugo Weaving. This followed her 2008 Archibald Prize win with You are what is most beautiful about me, a self portrait with Kell and Arella. Barton’s recent body of work based on Oscar Wilde’s short story The Nightingale and the Rose was published by Art & Australia in late 2012. The Nightingale and the Rose paintings were exhibited at Heide Museum of Modern Art, Melbourne in November 2012, and at the Newcastle Art Gallery, New South Wales from December 2012 to February 2013. Her work is represented in major museum collections in Australia, including the Art Gallery of New South Wales, Sydney, the Queensland Art Gallery / Gallery of Modern Art, Brisbane, the National Gallery of Australia, Canberra, the Art Gallery of South Australia, Adelaide and the Museum of Old and New Art (MONA), Hobart. electro orchid is Del Kathryn Barton’s fourth solo exhibition with Roslyn Oxley9 Gallery.