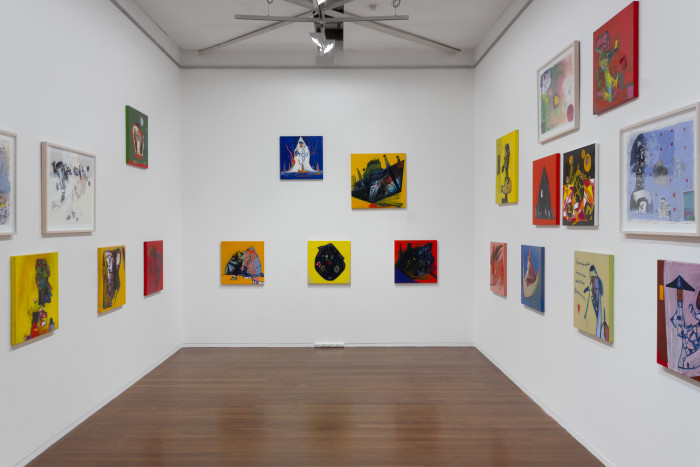 Gareth Sansom is well-known for his blistering and mammoth canvases, epics of obsession and complex psychological intrigue. But for his latest showing at Roslyn Oxley9 Gallery, Sansom has restrained his scale, if not his imagination.

Sansom has always worked in a range of media and scale but rarely opts to exhibit his more intimate works. Did You Know? is, however, no less a visceral gestalt of colour and ideas. Indeed, if anything, the more intimate scale emphasizes Sansom’s dense layering of cultural influences filtered through an idiosyncratic and somewhat eccentric personal aesthetic.

As Sebastian Smee noted in The Australian newspaper in 2007: “Sansom, as ever, stands apart. His paintings may be beautiful, in a mercurial kind of way, yet beauty is but one of their many strengths. These are urgent works of art that dare to describe the workings of the mind. They are large, cacophonous, unstable and sometimes quite terrifying.”

Writing on Sansom’s survey show in 2005 in Australian Art Collector, Ashley Crawford noted that: “A survey of Gareth Sansom is a psychological tsunami. Many of these works seem to be teetering on the edge of a psycho-sexual precipice and there are numerous hints of Sansom’s darker side. But at the same time it is a balancing act between righteous anger and simmering humour, an element of the emotive that could either lash out with awesome physicality or simply become a bark of harsh laughter.”

The works in Did You Know? carry many of the iconic images that have filtered into larger paintings over the years. There are references aplenty to a variety of cultural touchstones, from art history and cinema to literature and philosophy. As always, Sansom is a master of both colour and composition, maintaining an uneasy edge between rigorous discipline and all out anarchy.

Gareth Sansom’s artistic career spans almost 50 years and he is widely acknowledged as one of the most original and exciting Australian painters of his generation. Sansom has received numerous accolades and awards for his work, most recently, the John McCaughey Memorial Prize for painting (2008). Sansom’s influence in the Melbourne art scene as an educator has been extensive, and he concluded many years of teaching with his appointment as Dean of the School of Art at the Victorian College of Art. In 2005 the Ian Potter Museum of Art in Melbourne held a major retrospective exhibition titled ‘Welcome to my mind’ and more recently Sansom was featured in a survey exhibition (Alternative Persona) at the Art Gallery of Ballarat (2011). He was chosen to represent Australia at the 7th Indian Triennial in New Delhi in 1991 and since then has exhibited in many important contemporary surveys including ‘Eye to Eye, the Self Portrait in Contemporary Art at Ballarat Fine Art Gallery, 2007; and ‘Cross Currents: Focus on Australian Art, curated by John Stringer for the Museum of Contemporary Art, 2007. In 2010 Sansom was selected for the TarraWarra Modern at TarraWarra Museum of Art, The Basil Sellers Prize at the Ian Potter Museum of Art, the University of Melbourne’. The National Gallery of Victoria has awarded Sansom honorary life membership.Sansom’s work can be found in every major public collection throughout Australia and he is particularly well represented by the Queensland Art Gallery and the National Gallery of Victoria. Sansom’s work has also been acquired by the Metropolitan Museum of Art, New York, and is represented in private collections throughout Australia, Europe, India, NZ and the USA.