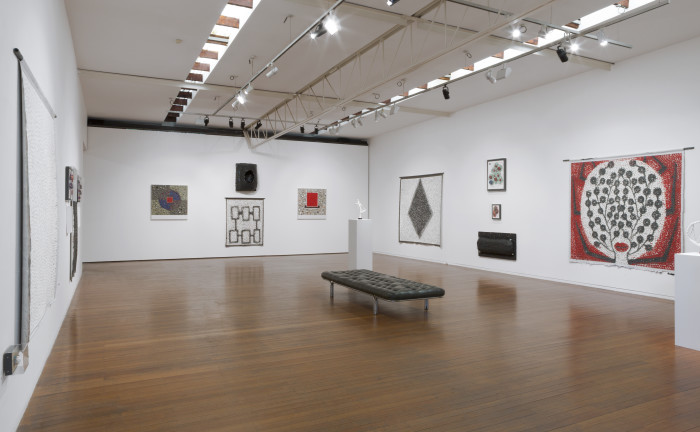 Wealleans considers his canvases as “paint farms” that form the base material in all of his work. He then violates the surface by gouging out the paint to reveal the hidden textures below. These pieces of paint are collected to later find their own significance as the material elements of his sculptural work and drawings. Inspired by the traditional techniques of Aboriginal dot painting, Wealleans uses these sculptural dots of paint by grafting them onto each other as well as on the surface of the paper. The paint farm canvases themselves are perceived as a bird's eye view of a foreign world. The landscape pitted and scarred in a vast expanse of craters: evidence of a visual design that resembles the formal arrangement of alien crop circles and markings.

The curiosity of Wealleans’s work is derived from an ambiguity that results in a multitude of possible interpretations and responses. Elements of both beauty and the beast encompass the same body leading to a simultaneous sense of repulsion and attraction. There is no black or white, simply our perception of the grey zone that exists between these two tonal extremes. Wealleans’s inclusion of found objects invokes a sense of nostalgia for a form of horror that was prevalent in the films and characters from the 60s and 70s. His work is a response to the desensitisation of today's masses, constantly exposed to ultra-violence in films, television and on the Internet. The process by which he manipulates and distorts a diverse collection of pop horror references from Hitchcock’s The Birds via Mickey Mouse to Aliens, allows him to enact the role of Doctor Frankenstein and explore that which is lurking beneath the surface.

Rohan Wealleans (b. 1977) completed a Master of Fine Arts in Painting from The Elam School of Fine Arts University of Auckland in 2003 and in the same year won the Waikato Art Prize. In 2006 he was the winner of the 15th Annual Wallace Art Award. Since 2001, Wealleans has exhibited regularly both in New Zealand and internationally. This year Rohan presented works at the Dowse Museum of Art in Wellington, the Wunderruma in Munich, Germany and BOS, New York, USA. Just last year Rohan exhibited in ‘Future Primitive’ at the Heide Museum of Art, Melbourne, Australia as well as a collaborative exhibition with Sarah Lucas at Contemporary Fine Arts in Berlin and C24 Gallery in New York. In 2012 Rohan exhibited solo shows at PS Project space in Amsterdam, Netherlands and at City Gallery in Wellington with a solo show titled, Apocalyptic Intuition. In 2010 David Elliot selected him for the ‘17th Biennale of Sydney: The Beauty of Distance, Songs of Survival in a Precarious Age’ (2010). Wealleans’ work was included in the ‘6th Asia Pacific Triennial of Contemporary Art’ at the Queensland Art Gallery (2009). Other important group exhibitions include: ‘Lost and Found: An Archaeology of the Present’ at the TarraWarra Museum of Art Healesville and ‘Just Painting’ at the Auckland Art Gallery, Auckland (2007). In 2008, Wealleans was selected by Rachel Kent for ‘Best of Discovery’ at the Sh Contemporary, Shanghai, China. The Auckland Art Gallery, Te Papa Tongarewa, The Museum of New Zealand, Wellington, The Govett-Brewster Gallery, New Plymouth and the Chartwell Collection as well as private collections in Australia and New Zealand hold Wealleans’ work.