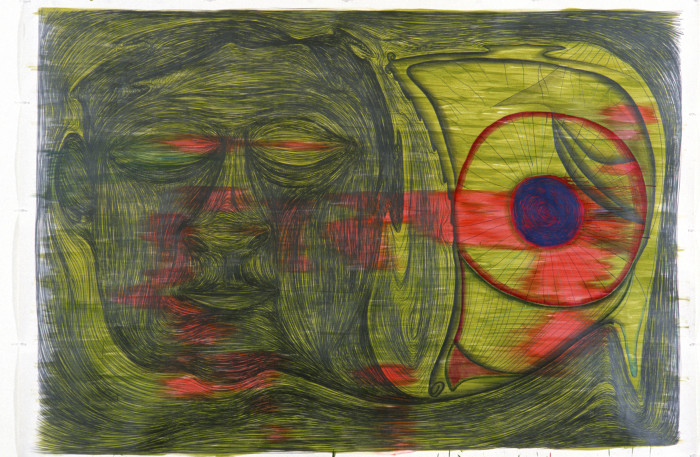 Dale Frank The Sleeper with a Strange Perspective on Life (The Abstracted Liver Eye), 1985, pencil on paper, 182 x 265 cm

When an artist turns his gaze inwards and uses the eye as an instrument to explore the world from an unfamiliar angle, he will find it hard to avoid the example of historical Surrealism. And when he turns the eye, the instrument of vision, into an object of vision, it becomes almost impossible for him to avoid reference to the systematic investigations of the Surrealists conducted.

Dale Frank is primarily attracted by the ideas formulated in the First Surrealist Manifesto, the activities of André Masson and Max Ernst, in the first half of the Twenties, when the Surrealists' discoveries were still experienced in all their freshness. He recognises himself in the way they tried to bridge the distance between the manuscript of the artist and the essence of his art. His way of working seems to return him almost spontaneously to the Surrealists' exploitation of the madness of the world. He formulated anew the logic of that madness, of those hallucinations, those guilt feelings, those idées fixes. And the obsessive character of his work suggests that he not only formulates it anew, but also experiences it anew.

In his most recent work Frank opposes the eye, as a sign of the microcosmos, of the moon, as a sign of the macrocosmos. And his vibrant, obsessive lines move between those two poles – poles, which are, incidentally very prominent in the form language of Surrealism. Think, for example, of the way in which Bunuel, in Un Chien Andalou, first shows an evening sky with clouds slicing through the moon, then cuts to that famous shot in which a razorblade slices through the eye. The same two poles we recognise in Frank's drawings – drawings which are, in a sense, all self-portraits. And in between them move exuberant anthromorphous and biomorphus figures, half mythical beings to life by the magic of a surreal myth.

Thus, in his unorthodox handwriting, Frank builds up a world of strange dreams and fantasies, a world full of expectation, as in the calm before the storm. And we sense how, on the surface of the drawing, the process of the artist giving birth becomes visible, the world turned inside out. Half hidden behind a thin pellicle the structure of a face emerges, at once recogniseable as a face and as a the erogenous zones of the body. A dense play of lines, opening and closing almost erotically, uniting in folds and bundles, expresses, both literally and figuratively, the process of the artist giving birth. A hand, guided by a horror vacui, then closes the surface, as if Frank wants both to suggest depth and to make a statement about the surface – the surface of the human body, the skin, as well as the surface of the drawing.