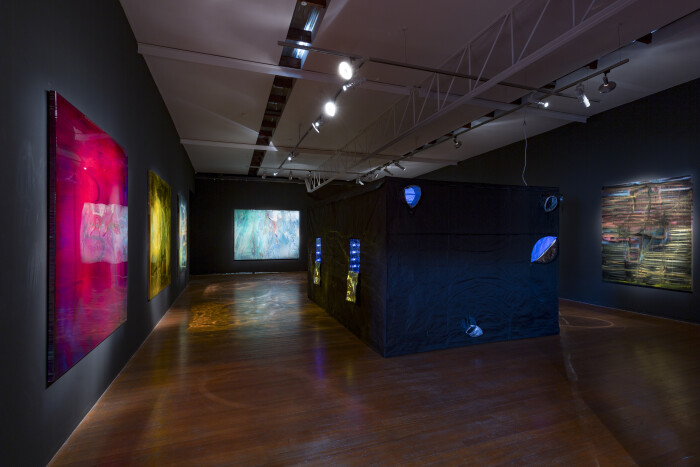 What we encounter in the index signs of painting is not the authentically revealed self of the painter. As indexes these signs are able to suggest the (imaginary) presence of the absent artist. Painting is, in other words, a highly differentiated language that consists of countless ever expanding techniques and methods, which allow for the fabrication of the impression of the artist’s presence as an effect.

For this indexical effect to occur the artist does not need to set their hand on the painting, or pour paint to canvas. Even if the artist hasn’t physically touched the work, it consists of indexical signs that are able to capture our attention because they are affected by the power of the object, which in paintings case, is a subject - the person of the artist.

The unique dynamic developed by “paint” on a surface already allows for the sensation that we are dealing with a model of subjectivity in the sense of a paintings independent mental life; “an artist’s character and temperament" comes to the fore; the painter reveals himself in his work.

A painting’s signs are indexical insofar as they tend to be read as traces of the artist; we are dealing with the ghost of a presence. Frank Stella observed that painting is a sort of handwriting. Today, one could elaborate on this that the more negation there is of this handwriting, the more this negation will be considered the handwriting of the artist. This is also true for paintings that avoid handwriting by using a technical device. All the myriad attempts by contemporary painting to undermine the authority of the artist-subject with the help of various anti-subjective procedures, nevertheless, allow the artist-subject to enter through the now more often used back door (the kitchen as the new centre of the home). The more artists have tried to erase themselves from their work, the more subject-like, artist-subject, their work is going to appear.

For an artwork to be considered valuable it must first be attributed to an author - one could say thereby loaded with intentionality. This process becomes intensified in the case of the indexical signs, the artist seems to have left traces (even if the work is mechanically produced, or a collection of adhered objects), enhancing the impression of an intentional artwork, of an artwork that is “an emanation and a manifestation of the artist”. Painting, then, has to be understood as an art form that is particularly favourable to the belief that by experiencing or purchasing a work of art, it is possible to get a more immediate access to what is assumed to be the singularity of the artist, and their life.

All artworks possess a kind of "memorial power” because they are associated with a person whose power operates quite literally in that painting. Painting is therefore particularly well equipped to satisfy the longing for an (imaginary) substance in value. Indeed, painting could be perceived as a demonstration of how value is founded on something concrete: the living labour and the life of the artist. Painting seems to be the last place where the desire for a concrete foundation of value seemingly gets fulfilled.

The mark, the intention and trace of the artist can be read as tracing labour and the artists life activities. Painting therefore generates the illusionary impression that it is possible to grasp the fibre of the living artists labour that was mobilised for it. The picture condenses and stores up labour time in a way. All of the labour, or the artists intention and existence so far, stored in the painting is experienced by the viewer at once rather than unfolding over time. This means a painting not only compresses the life and the labour of the artist but allows us to experience both simultaneously in a way that can appeal to us but does not have to appeal to us. We can turn our gaze away without lingering. I agree with Delacroix, when he noted that we can see the artist and, "the virtue of their painting in an instant”.

Painting presents both the artist’s life-ness, and liveliness in the form of a material object, which is not reducible, and that non-reducibility might be its special attraction. Painting’s capacity to appear saturated with the life - and the labour time - of the artist, while remaining distinct from it, makes it the ideal candidate for value production in the new economy, the contemporary experience that is busy absorbing life.

Dale Frank is one of Australia’s foremost contemporary painters. Frank has been exhibiting nationally and internationally for over three decades. Frank’s work has been included in major exhibitions, such as; Every Brilliant Eye: Australian Art of the 1990’s, National Gallery of Victoria, Melbourne (2017); Shut Up And Paint, National Gallery of Victoria, Melbourne (2016); Dancing Umbrellas, curated by Sue Crammer, Heide Museum of Modern Art, Melbourne (2016); Luminous World, National Art School, Sydney (2016); and Lurid Beauty: Australian Surrealism and its Echoes, National Gallery of Victoria, Melbourne (2015). Frank was included in Dark Heart, curated by Nick Mitzevich, Adelaide Biennial of Australian Art, Art Gallery of South Australia, Adelaide, 2014. In 2013, his work was featured in Personal Structures at the Palazzo Bembo as part of the official program of the 55th Venice Biennale. He has been included in three Biennales of Sydney (1982, 1990 and 2010) and he was selected for the major survey exhibition, Contemporary Australia: Optimism at the Queensland Art Gallery | Gallery of Modern Art, Brisbane (2008). A major solo retrospective of his work was held at the Museum of Contemporary Art, Sydney in 2000. In 1983, Frank was included in the exhibition Panorama della post - critica: critica ed arte at the Museo Palazzo Lanfranchi in Pisa along with Thomas Lawson and Anselm Kiefer. In 1984, Frank was included in the Aperto section of the Venice Biennale and Junger Europaischer Maler (Young European Painters) section in the exhibition, Europe-Amerika: 1940 to the Present, at the Museum Ludwig, Cologne. Frank’s paintings are held in every major public collection in Australia as well as museums worldwide, including the Museum of Fine Arts, Boston, the Solomon R. Guggenheim Museum, New York and the Kunsthaus, Zurich. A major monograph on Dale Frank’s work, ‘So Far: the Art of Dale Frank 2005-1980’ was published in 2007.

Dale Frank has been represented by Roslyn Oxley9 Gallery since 1982.