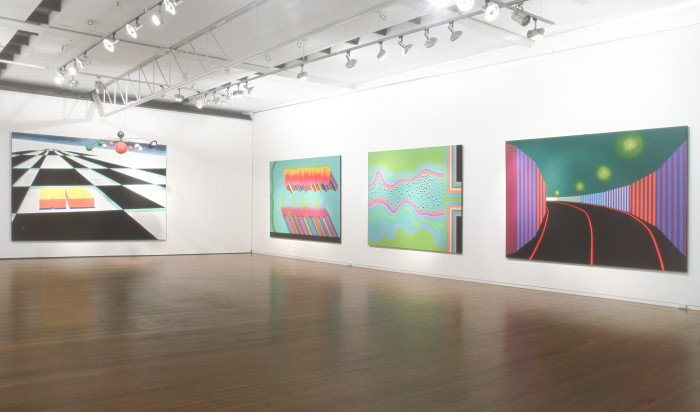 Dale Frank's current series of paintings celebrate the vibrant sensual painterly style he is known for. The work literally bathes in its own electric illumination but is given a particular life by the changing choreography of colour flowing through its strings of light. Frank's paintings are always determinedly of the here and now of their very moment of production. They partake in the style and look, the glamour of their moment but also burst beyond it. His works have often been described as paradoxical, flirting with the excessive and the extreme, yet celebrating intense beauty and a sense of stylistic freedom that verges upon the anarchic.

Over the last 20 years, few artists of Frank's generation have been as critically regarded and extraordinary in their work and profile as Dale Frank. He is arguably one of the most internationally known and respected Australian artists of his generation. A significant artist of the gallery since it began in 1982; Frank has been one of our most diverse yet consistent artists. His diverse practice incorporates painting, drawing, sculpture, collage, and performance including video and films. And his prolific artistic output is matched with a similarly long bibliography—since 1982 there have been over 400 articles and reviews. Indeed, it is difficult to name one other artist of Frank's age with a bibliography and profile of this extent.

The primary subject in all of his work, in whatever medium, is described by curator, Sue Cramer, as "...art itself and its many layered relationship to reality—to 'real' objects and situations to the viewer, to society, and to the times which it is made." Frank's illustrious career has, and continues, to place him in a pivotal position, never ceasing to capture the interest of the curators, critics and audiences alike.

Dale Frank has shown extensively in Australia, Europe, and the U.S. These exhibitions include the 1984 Venice Biennale: the Stedelijk Museum in Amsterdam: the 1979, 1982, and 1990 Sydney Biennales; a major painting retrospective at the Museum of Contemporary Art, Sydney in 2000 and solo exhibition at the Art Gallery of New South Wales also in 2000. His work is held in the Solomon R. Guggenheim Museum, New York; Boston Museum of Fine Art; Zurich Kunsthaus; Musee de Ville de Liege; as well as numerous private and all major Australia collections.