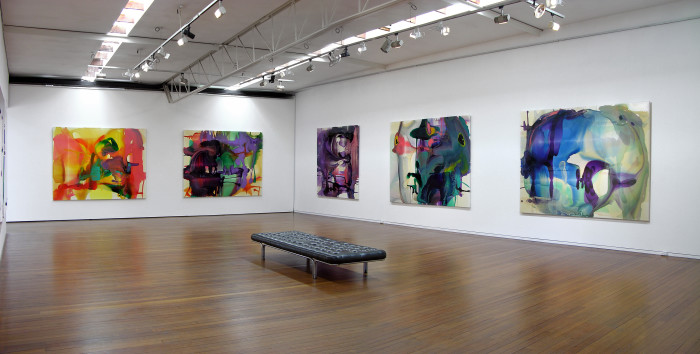 Dale Frank paints without a brush to exploit the innate expressive potential of tinted varnish. Complex galaxies of colour bleed into each other revealing extraordinary macro and micro cosmoses. This process is highly scientific as different paint temperatures and time ratios effect the finished artwork.

“When asked how he acquired his fine collection of French Empire clocks, Paul Keating, then prime minister of Australia, described his method thus; ‘Most people catch antiques when they are tame, in fashionable shops. I catch my clocks while they are still wild, in out-of-the-way places.’”

Frank provides alluring corridors of viscous colour in varnish that accumulates and recedes. His layering technique is not a palimpsest of different instants in the work’s creation – the painting can not be infiltrated in this way, nor traversed as a representational, narrative painting can be. Rather, the layers of coloured paint present a number of simultaneous combustive reactions in which Frank lets the vivid but essentially non-figurative particularity of a moment in time and space be expressed.

“One room of the house was literally stuffed, literally, with Staffordshire pottery on shelving, cheek by jowl, floor to ceiling. There was no room to move; you bought the figures nearest to the door. The room seem untouched despite my best efforts to empty the place.”

The challenge of Frank’s painting is its abstraction from the moment in time that he wishes to relate. His coloured surfaces elicit a multitude of emotional and intellectual responses that we, as viewers, must resolve.

Dale Frank has been showing with Roslyn Oxley9 Gallery since 1982. His career spans more than twenty years. In 1983, he was included in the exhibition Panorama della post - critica: critica ed arte at the Museo Palazzo Lanfranchi in Pisa along with Thomas Lawson and Anselm Kiefer (curated by Helena Kontova). In 1984 he was included in the Aperto section of the Venice Biennale. Returning to , in 1990 he was included in the 8th Biennale of Sydney (curated by Rene Block). A major solo retrospective of his work was held at the Museum of Contemporary Art, Sydney in 2000. His paintings are held in every major public collection in and in numerous private and corporate collections in , Europe and the . In 2005 Frank won The Arthur Guy Memorial Painting Prize at the Bendigo Art Gallery, Victoria. A new monograph on Dale Frank is currently in production.