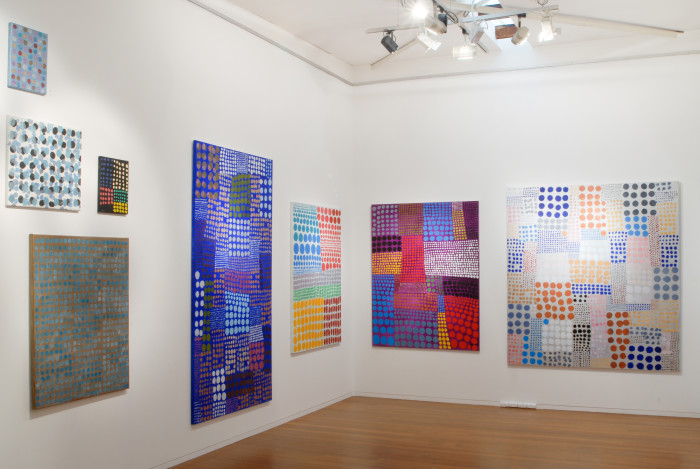 The only problem in art is to achieve a balance between the subjective and objective. But it is of the utmost importance that this problem should be solved, in the realm of plastic art—technically, as it were—and not in the realm of thought. The work of art must be “produced,” “constructed.” One must create as objective as possible a representation of forms and relations. Such work can never be empty because the opposition of its constructive elements and its execution arouse emotion. [1]

Angela Brennan’s exhibition at Roslyn Oxley9 Gallery features sixteen paintings of varying sizes from small to large, hung salon-style and in straight lines. The repeated motif is the circle, a basic shape we recognise everywhere, not forgetting the sun and moon.

In this exhibition, Brennan’s process hinges on the relational aspects of colour, to make shallow painted surfaces oscillate, recede and swell. The base colours of silver, gold, bronze and copper, resonate through a colour-chart of pearlescent shades. Elsewhere clean bright colours seem to occupy a separate plane—suspended—above the suffused glow of the background.

The paintings are captured forms of physical acts. The apparent ease of delivery belies the effort to explore and exploit a formal device. Colour. Circles. Repetition. Difference.

As in previous shows (whether abstract or figurative), each of Brennan’s works privilege the idea of variation from some general rule or form. Tones and nuances are teased out in a language of brushstrokes. The handpainted works suggest movement, instances or periods of time.

Angela Brennan has recently worked with figurative and text paintings although her work is principally associated with abstract painting. Her work of the 1980s also included figurative painting and installation work. In 2006 the Monash University Museum of Art, Melbourne, presented a major survey of Brennan’s practice from 1975 to 2006, Every morning I wake up on the wrong side of capitalism. She was included in the group exhibitions Talking About Abstraction at Ivan Dougherty Gallery, Sydney (2004) and Good Vibrations: The Legacy of Op Art in , at Heide Museum of Modern Art, Melbourne (2002). She has been short-listed for numerous art prizes. Her paintings are held in every major public collection in Victoria as well as the National Gallery of Australia and numerous private collections in Australia, New York, Israel and Singapore, including the Mont Blanc Art Collection in Switzerland. In 2003 Brennan participated in an artist-in-residency program at the Red Gate Gallery at the Beijing Art Academy in . In 2005, Brennan held her first commercial exhibition in London. Angela Brennan has been exhibiting with Roslyn Oxley9 Gallery since 1993. Circular Scenery will be her eighth solo exhibition with the gallery.