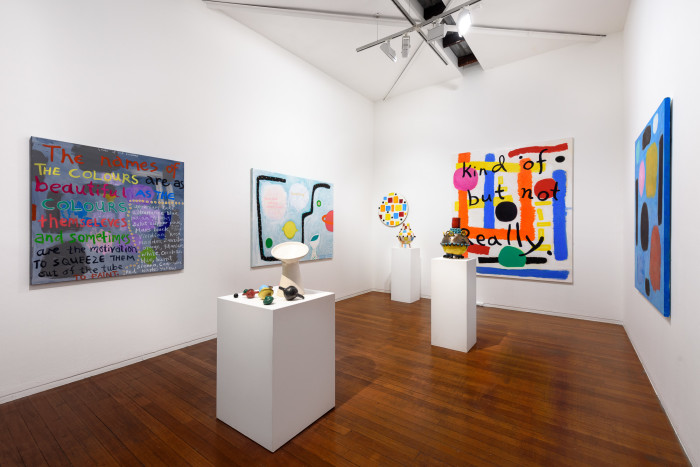 "Angela Brennan has been making abstract paintings since the late 1980s, and the status of her chosen format has shifted ground several times over this period. She also makes figurative and text-based works, and there is a productive exchange between her abstractions and these other modes of working. The stylised forms of her portraits, for example, often look poised to dissolve into patterned shapes, whilst her abstract compositions sometimes name-check material that can appear incongruous as subject matter. Signalling an inner life made up of reading, looking, and listening, these references are wide in scope, encompassing popular culture, art history, philosophy, and more. The beguiling citations scattered throughout Brennan’s work build a potent self-image of the artist, reflecting her various interests, beliefs, and preferences. Brennan’s references productively complicate her painted imagery, provoking the viewer to engage with the work in new and unknown ways."

This book will be launched in Sydney at Roslyn Oxley9 Gallery in May 2019. Details to be announced.

Informed by a degree in Fine Art Angela Brennan (b.1960) has been creating modern, abstract canvases exploding with colour for over 30 years. During that time she has also worked with text paintings, figuration and now ceramics. Brennan has exhibited extensively in Australia and overseas. Selected solo exhibitions include Angela Brennan: Lounging in the doorways of two worlds, Monash Art Design & Architecture Gallery, Melbourne (2019); Forms of Life, Ian Potter Museum of Art, Melbourne (2017); The Garden of Earthly Delights (with Glenn Barkley), Westspace, Melbourne (2016); On a round ball, China Art Projects, Hong Kong (2013); To whom Achilles swiftest of the swift replied, Orexart, Auckland (2011); the survey exhibition Angela Brennan: Every Morning I Wake Up on the Wrong Side of Capitalism, Monash University Museum of Art, Melbourne (2006) and Paintings and Drawings, de Recourt Art, The Gallery on Cork Street, London (2005).

Angela Brennan has been exhibiting with Roslyn Oxley9 Gallery since 1993. Celestial – Terrestrial will be her 12th solo exhibition with the gallery.