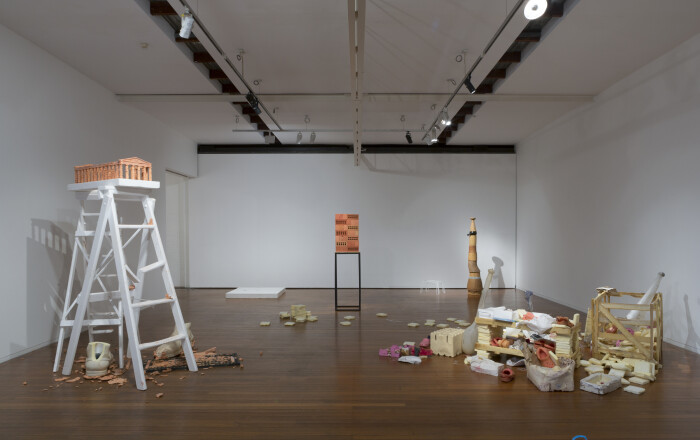 Hany Armanious’ work is filled with riddles and anomalies that inspire the viewer to question the ground on which they stand. Armanious meticulously reproduces everyday objects transforming them into bewildering constructions. This current show focuses on a body of work made between 2007 and 2012. The themes investigated are elevations, legs, footings, impressions, and depressions; essentially anything that engages how we connect to the earth. Armanious examines the premise of building from the ground up, a tenet paramount to sculpture, architecture, and human anatomy.

Two works central to this exhibition are Dew Point and Sandy Purifies and both typify the theme of connection with the ground. Sandy Purifies unites the remnants of two installations that were in underground storage in New York at the time of Hurricane Sandy in 2012. Presented are the remaining pieces that survived the flood.

Dew Point is a pewter cast vintage film projector on a make shift table, directed at a cast thirty litre water bottle. The title Dew Point refers to the point at which ether transmutes to liquid and speaks of the universal balance between states. This work is particularly poignant to Armanious. When it was last shown in London, art and reality collided. While Armanious was suddenly hospitalized and facing the possibility of a leg amputation, the support under the table of Dew Point unexpectedly failed, sending the contents of the artwork crashing to the floor.

The seductive feature of Armanious’ practice is that he constantly draws our attention to the act of looking and perceiving, insisting on a level of intimacy with the work, which demands the viewer, acknowledge one’s complicities in the artificial construction of realities.