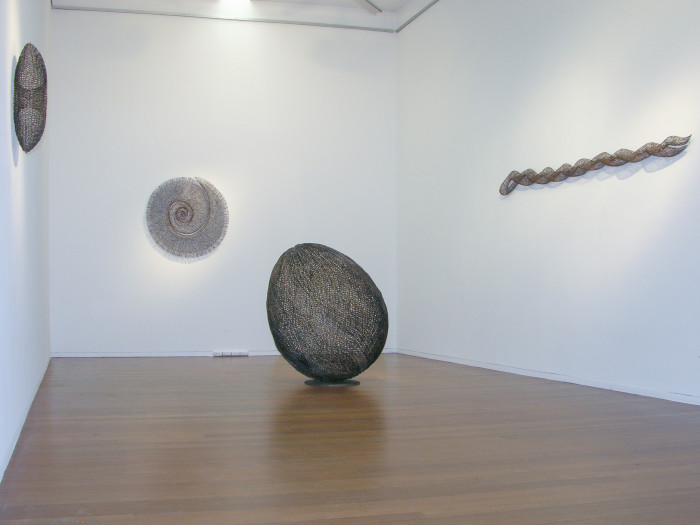 In her latest exhibition of wall-mounted and free-standing sculptures at Roslyn Oxley9 Gallery, Bronwyn Oliver has worked-up the busy external structures of her easy organic forms. Orb-like figures and over-sized seed shapes encase air and light within dizzying copper wire labrynths. The surfaces have depth: in Nut, hundreds of tight coils knitted together travel the length of an ovoid form describing its shape; in Lotus, myriad leaf or petal-like forms tile a sphere; in Focus, a radiating fibrous membrane replicates the delicate structure of an eye's iris.The microcosmic, complex surface of an Oliver sculpture is an interface between the macroform of its overall shape and the internal cavity or void where the sculpture breathes. The ease of connection between these three formal aspects of her works along with their gently mimetic character—as alluded by their titles—constitute their elegance and simple pleasure.

There is a definite temptation to touch Oliver's sculptures. Their tactility and anatomical physicality gives them an animal-like quality. They remind us that the world is a corporeal place. Scale is also an important element in Oliver's work as her forms are often oversized—prehistorically scaled—versions of a smaller specimen taken from the natural world. Creating sculptures for outdoor settings allows Oliver to further explore the aspect of scale in her work as well as the relation between her objects and nature. This can be seen in the present exhibition where the two largest sculptures are scaled-up versions of two smaller works intended for the more protected, domesticated environs of indoors.

Bronwyn Oliver studied sculpture at Alexander Mackie in Sydney and completed her Masters of Art at Chelsea School of Art in London in 1983. In 2003, she was selected for the inaugural Beijing Biennale. Other recent group exhibitions include Home Sweet Home Works from the Peter Fay collection (2003) at the National Gallery of Australia and Fathoming: Contemporary Australian Sculpture (2002), a Regional Galleries Association of Queensland Travelling Exhibition. Her work is held in every major public collection in Australia as well as many important private and corporate collections in Australia and overseas. The winner of many public sculpture commissions, Oliver's work can be seen in the Royal Botanic Gardens, Sydney and Queen Street Mall in Brisbane. Recent major commissions include the University of New South Wales and the Hilton Hotel Sydney. Oliver has been the recipient of numerous art awards including the prestigious Moet & Chandon Fellowship in 1994. Bronwyn Oliver has been exhibiting with Roslyn Oxley9 Gallery since 1986. The current exhibition is her tenth solo exhibition with the Gallery.