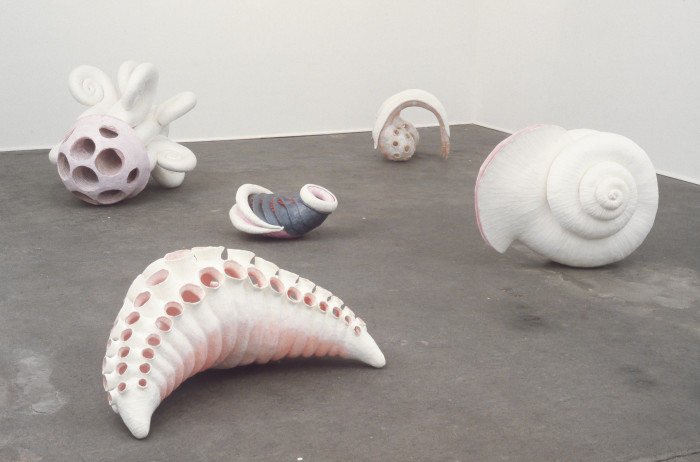 A generation of artists have begun to emerge for whom post modernism is the natural condition or theoretical environment. It does not necessarily exercise their minds any more than a generation developing within a modernist critical framework felt the need to constantly refer to the antics of academics and critics, to determine their position. Nonetheless the critical context does provide something of a platform if only because it helps to articulate the creative dilemmas of the time. Hence many of the younger artists today do not feel the need to make deconstructive works as a response to the problems of representation expressed by writers such as Baudrillard, Douglas Crimp or Craig Owens. Their work however is very much of the time. Their solutions are perhaps one step ahead of the critical angst.

Bronwyn Oliver could not have made her curious creatures during the 60's or early 70's. Sculpture was either struggling to maintain the illusion of a late modernist code, no longer anything Brancusi would have recognised, or else it was pushing the frontiers of theatre in art between minimalist and conceptual activity, the kind of thing Michael Fried so abhorred. Oliver spent 2 years in London(83/84) at a crucial time for developments in sculpture. Britain has always had a tendency to produce sculptural innovation and the early 80's were particularly fruitful. Abstraction was turned into a more expansive programme of invention with artists like Richard Deacon making highly evocative forms that would have shocked Fried by their deliberate enigmatic references to a possible world of forms outside of the objects themselves. Furthermore artists like Woodrow and Cragg were making great play on metaphor in both the medium and the image. Multiple layering of meaning and literary reference were being forced back into work, not as a revision to historicist allegory of the 19th century but to an expansive attitude towards the possibility of objects to start trains of associations in the imagination.

Unlike the deconstructive post modernists, they do not stop at the problematisation of representation and literal presentation of paradox to highlight this critical proposition. They seek to create forms which can draw the viewer into an active dialogue or an imaginative poetic adventure. They acknowledge the death of the author in the modernist sense and allow their objects to be widely referential, "they set the text going". Deacon invents forms that somehow invoke a history of functional objects never quite specific enough to stop our own inventive response but evocative enough to set us on the right trail. Houshiary connects with an abstract history of Islam while deploying a curious western sculptural sensibility, they are at once exotic and familiar. Kapoor invokes the tantric and metaphors for the state of transcendent energy. Oliver uses biological allegories to suggest an autobiographical condition. While autobiography as such is of little interest aesthetically it often works by assimilation. What deeply moves one person and can find expression in substantial form, albeit allegorically, will move a viewer. These crustaceous husks reveal a pink and vulnerable interior. Clamorous and at times hostile exteriors betray the nakedness of the indweller. Sculptural possibilities of enclosure and exclusion and plastic manipulation of space are well contrived in the works but this is turned from a formalist code into a readable metaphor. Arp, Brancusi and Moore would all have been at a home with such a project but perhaps their surrealist associations exclude them from the narrowing view of modernism exposed by post modernist criticism.