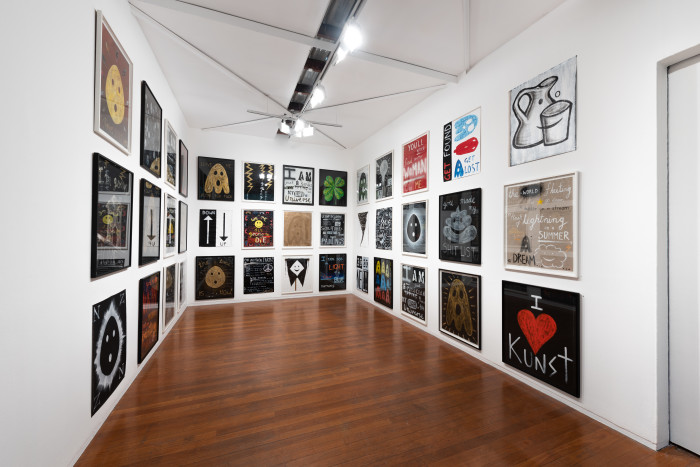 There’s a lot of shared space between Nell and me. Some of which includes a love for poetry, the pop music of Courtney Barnett, an eclectic range of podcasts, as well as a common interest in the work of Colin McCahon.

As a New Zealander I find it is impossible to look at Nell’s paintings without thinking of him. Besides the fact that Nell is a self-confessed “major McCahon fan”, like McCahon she also transforms words into visual imagery by rendering exquisitely considered typologies and fonts into paintings. Where McCahon used the bible and the words of local poets with whom he collaborated; Nell ‘s popular culture is a showcase of her deep knowledge of pop music and in this instance, instead of the bible, she uses words from ancient and universal wisdoms such as St Francis of Assisi’s “Peace Prayer” and The Diamond Sutra.

Like many great artists Nell has a sharp and gathering eye and the confidence to reinterpret ideas and make them her own.  Her interest in music is well established in her previous work, especially her love for AC/DC.  With this show Nell’s playlist is as wide as it is deep. She riffs off pop songs from artists as diverse as Marvin Gaye’s Sexual Healing, Carly Simon’s You’re so Vain, and songs from the Rocky Horror Picture Show, to more recent and obscure music by the likes of Lord Huron and Parquet Courts. Into this mix, she adds spiritual and philosophical blessings and prayers. It would be easy for this mash-up to not work – for it to be construed as profane or glib. However this is not the case. As with all her work it is respect and reverence for her subject matter, and an invitation to the viewer to look deeper into the work that radiates.

Whilst Nell cherry picks from the archives of art history and paints her greatest hits, as an artist her alchemy is distinctly her own. She takes popular signs and symbols and plays with them. Nell turns shit into smiles, she makes an egg out of death, her clouds are sunny.

Like the artist herself, Nell’s work is imbued with energy, wit and intelligence. Her joy in life, in being fully present – mindful of all and everything in her orbit, living consciously – is reflected in the work she makes.

In my work as Director of McCahon House Museum and Artists Residency, a mantra I regularly ask myself as we continue to develop the visitor experience at the Museum is, “would Colin McCahon be ok with this?”.  To use the sensibility of McCahon as a barometer reading to any ‘improvements’ we may wish to make. With “Blessings” my sense is that not only would McCahon respect Nell’s chosen prayers and blessings; he’d also be amused and honoured to find her investigating a similar territory, asking familiar questions and using an art practice to explore the space between the known and the unknown.

Blessings is dedicated to Virginia Wilson. My deepest thanks to KK for everything, Warwick Edgington for studio assistance and laughs, Rod Denison of Jim Croft for the framing, Viv Stone Director of Colin McCahon House Museum Trust & Artists’ Residency for THE words, Carriageworks for the Clothing Store Studios where ‘Blessings’ was entirely made. And I’d especially like to thank all my studio colleagues; Tony Albert, Tully Arnot, Mikala Dwyer, Samuel Hodge, Claudia Nicholson, Other Architects and Phaptawan Suwannakudt for their companionship on the journey of making art.

Across two decades, Nell’s work has been included in over 250 exhibitions including a curated museum survey at Shepparton Art Museum (2016). Nell has exhibited regularly at contemporary, university, regional and state galleries in Australia. Selected recent exhibitions include The National: New Australian Art, Museum of Contemporary Art (2017); Adelaide Biennial of Australian Art, Art Gallery of South Australia (2016); WORDS + CROSSES, Waikato Institute of Technology, New Zealand (2016); BLACK ‘n’ WHITE at PS Project Space, Amsterdam (2015) and Let There Be Robe, MONA FOMA, Museum of Old and New Art, Hobart (2012). Nell has collaborated with Romance Was Born at the National Gallery of Victoria (2014) and on The Oracle collection (2011–12). This collection and collaboration was named ‘Masterpiece of Australian Fashion’ for the first decade of this century by The Monthly magazine. Nell studied at Sydney College of the Arts, Sydney, The University of California, Los Angeles and École Nationale Supérieure des Beaux-Arts, Paris and has undertaken residences in Beijing and Rome. Nell is a 2018 Carriageworks Studio Artist and is currently working on a major public artwork in collaboration with Cave Urban entiled Eveleigh Tree House. Commissioned by Carriageworks and Mirvac, Eveleigh Tree House is due for completion in April 2019.