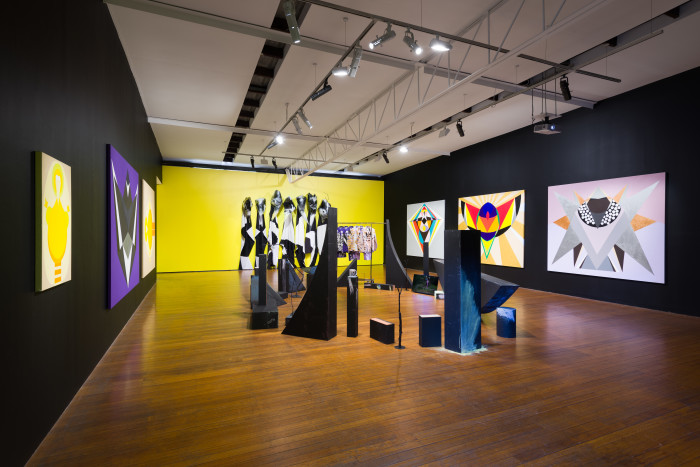 Mikala Dwyer can’t stop doing this: it’s her strange attractor. This eccentric architecture of the alien visitor who by borrowing, burrowing and building has made part of this world, but only for the time being, their home. In Dwyer’s idiom, this household is a capricious cocktail of animal, insect and human architecture, but so often impelled and inflected by the fantastic capacity of children to convert and subvert habituated domestic decor into a camp. When children go camping in a sleepover, for instance, they are like migrating species able to inventively forage and transfigure their invaded habitat: upending chairs as bunkers, hoisting bed linen into tents that shade the souks of a caravanserai, or tunnelling and caving inside clothing heaped into stupas or mountains.

Elsewhere, Dwyer’s camps can assume the fantastic dimensions of crawlspaces between walls or under floorboards or as wormholes through the earth, through organic bodies and through celestial space. This particular encampment is a nest, although without the sentiments of cocooning wellness and refuge that carry connotations of nesting as commercial domestication or political settlement, or the governance of asylum. This is not so much the nest of a bower bird, or even a magpie, let alone a holy dove or imperial eagle, but rather a cuckoo bird. Something alien and vagrant has intruded upon the territorial claim of family or clan, even species.

Among other seeming bric-a-brac, Dwyer’s nest and its décor are fabricated from oversized versions of Bauhaus designer Alma Siedhoff-Buscher’s famous 1920s minimalist, modular children’s toy building blocks. Notoriously antagonistic to fairy tales as “a burden for small brains”, Siedhoff-Buscher steered child’s play toward training in the rationality and lucidity of engineered construction – of society and even cosmos as well as of the built environment. But Dwyer’s nest entangles this didactic lexicon with darker, feral fantasies of creation. Golden eggs are brick-like droppings. Bronzed tree branches suggest withered vine shoots, as well as fossilised, fierce talons. Anality, mortality and macabre comedy overtake any proposition of nature and architecture being in some symbiotic or sustainable harmony.

In this cuckoo nest, hospitality is roguishly exploited. Dwyer speaks about planning to have the gallerist and gallery staff costumed in pyjamas as harlequin performers, in a masquerade designed  (with Kay Abude) for the opening night. A pyjama party? Maybe there’s a playful allusion to the Playboy mansion parties and their host Hugh Hefner’s iconic outfit. But these pyjama patterns are overprinted with behavioural commands, stage directions for playing a bird: preening, flying…dying. I suspect a mischievous—and somewhat sinister—figure is hosting this sleepover.

Around the walls, the colliding Vorticist abstraction of Dwyer’s paintings suggests a flurry of landing or departing birds’ wings, although not in panicked or ecstatic flight but with a heraldic, glyph-like composure. More like ritual regalia or multicoloured if motley unfurled coats than elemental architecture, their hard-edge facets hilariously assemble into a monumental mock-up of that great phantasmic androgyne of childhood surreality, Sesame Street’s Big Bird. This compassionate Aesopian monster is endearing because it manifests almost every child’s companionable paragon of mischief, their spectral invisible friend. But while Big Bird nostalgically echoes Mother Goose’s lulling bed-time prudence, its costumed exaggeration also insinuates the bogeyman and phallic provocateur, Mr Punch. Children gleefully welcome such demons in. There is a menace in this nest, lurking like a raptor in Jurassic Park.

Have you noticed that in so many movies, whether as agents of evil masters and mistresses or out of instinctual vengeance, birds go for the eyes? In Roger Corman’s quirky The Terror, in Dario Argento’s majestically insane Opera, or in the exquisite sadism of Alfred Hitchock’s The Birds: the emblematic horror is a bird swooping toward a vulnerable upturned eye, and the shocking glimpse of a bloody, empty eye socket as if the beak has not just pecked away the eyeball, but stolen it. And, in so doing, transfigured the eye into another of the body’s erogenous holes: mouth, anus, vagina.

That creepy night-time visitor to children’s bedrooms, the sandman, throws sand in their eyes to make them sleepy. Dwyer’s visitor –and fabricator of this nest—is, I’d say, more like the devil in E.T.A Hoffman’s great gothic story, The Sandman. The eponymous spook of that story plucks out the eyes of children who won’t go to sleep, who stay up past their bedtime perhaps to glimpse the forbidden secrets of the adult world after dark. Hoffman’s sandman takes their eyes away to its nest on the moon where it feeds them to its squawking brood of bird-beaked children. Dwyer’s nest might be on the moon or on the earth, but either way the sandman’s coming.

Mikala Dwyer (b. 1959, Sydney. Lives and works Melbourne) has been exhibited extensively in Australia and internationally since the early 1980s. Dwyer’s new temporary public art titled Apparition, was commissioned by the City of Melbourne in collaboration with RMIT University, can be seen after dark at University Square, Carlton (2021).