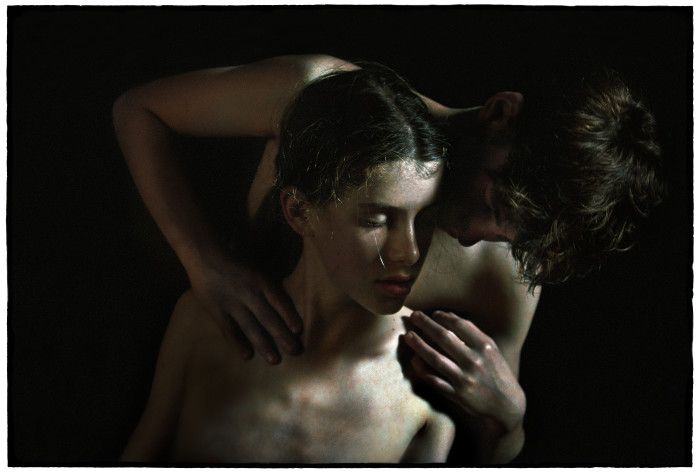 E﻿ntering the transformed gallery from a room of French 19th century art, the impact is stunning…. Ineffability is the keynote of Henson’s work. Even the most detailed description would not prepare viewers for the experience of standing in front of these images in a darkened room…. The landscapes are deceptively straightforward at first glance….Yet the complexity of taking the picture from exactly the right position with the right quality of light is immense. It’s one of the miracles of art that the most difficult and complicated processes result in works of pristine simplicity… With the figure studies, Henson has posed his teenage models in inky darkness….In one of the most striking a girl rests her head on the wrist of a long, thin arm that snakes away out of darkness… The serpentine rhythms of the composition are breathtaking. There’s an immediate, primal charge; a mystery and sensuality; and a sense of mythical, archetypal associations that can be felt but not readily identified.

—John McDonald, review of Bill Henson’s exhibition at the National Gallery of Victoria, 2017

This is Bill Henson’s first exhibition in Sydney in seven years. It is his tenth exhibition at Roslyn Oxley9 Gallery, Sydney.