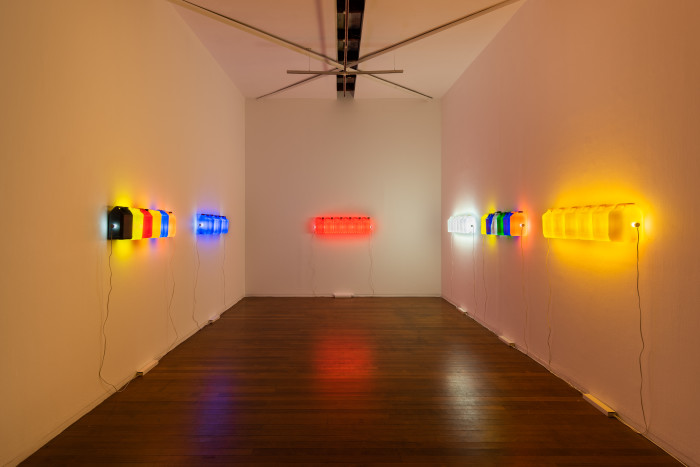 Light is colour, colour is light. I decided to go straight to light. It is a material in the same way as paint in terms of colour.
—Bill Culbert

Light is immaterial, yet capable of constructing three-dimensional space. It can exist at and as a source, and can project, becoming a beam, an impact, a mode of image transmission, a vessel. Its casual effects are, potentially, many: it can cast shadows, pierce opacities, make reflections and refractions. Light also sustains large metaphorical and allegorical associations, spilling easily into the language of illumination and transcendence, brilliance and obscurity, dawns that ‘herald’ and sunsets as melancholy prefacers of closure or death. Culbert utterly repudiates this metaphorical seductiveness; his scepticism generates the work’s critical iridescence, the sense that our perception is being watched and measured.

For the artist, light offered a space of intellectual and imaginative play between the ‘natural’ and the ‘artificial’. It operated as a brilliant conductor between life and art. It radically condensed the discussion of surface and colour, redirecting surface outward into projected three-dimensional space. It dematerialised the art object while facilitating a relationship with industrial processes, with a thread of modernist optimism.

Roslyn Oxley9 Gallery is pleased to present the first posthumous exhibition of sculptor and light installation artist Bill Culbert (1935-2019). Spanning an incredible 60-year career, the artist had more than 100 solo exhibitions worldwide. Culbert was notable for his use of light in painting, photography, sculpture and installation work, as well as his use of found and recycled materials. This exhibition comprises Culbert's iconic series Strait — a luminous line of fluorescent tubes and an eclectic mix of repurposed vessels wrapped around three adjacent walls. Culbert reunited these 'objects of my affection', as Man Ray called his versions of Duchampian ready-mades, and replaced them with a delicacy and chromatic brilliance.

Culbert's sculpture demonstrates his inventiveness with illumination, opacity, shadow, transparency and reflection with found objects. From suitcases pierced with fluorescent tubes, repurposed furniture, vast arrays of reclaimed plastic containers, Culbert celebrated common things and imbues them with poetic presence. The artist's ability to transform ordinary and often discarded materials into an extraordinary ‘otherness’ is uplifting. Combining light, composition and materials with a rare economy, he produced art that is surreal, lyrical and challenging in the way it invites us to revalue familiar objects and refocus our perceptions.