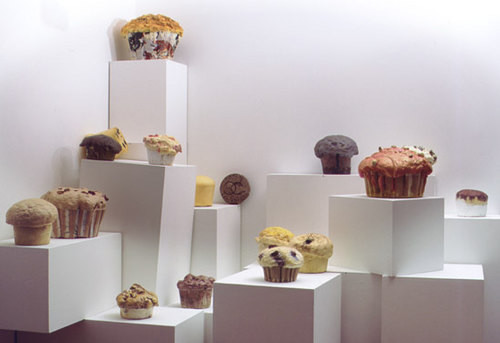 From our earliest inculcation into the mysteries of art, we are taught that two intangible qualities—'creativity' and 'imagination'—are what distinguish the artist from the layperson. Perhaps one thing that could be said to separate Hany Armanious from other art practitioners is his ability to demonstrate that artistic power exists in the world independently of the artist, that it resides outside, within the chaotic flux of the material world. Concomitant with this shift in understanding, is the realisation that the phenomenon of plasticity is an extraordinary and somewhat supernatural thing. As one of the defining characteristics of matter, plasticity is for us both the tangible expression of material agitation and excitation and the vehicle by which human beings make their mark upon the earth.

At first sight, the works in Armanious' exhibition, Art Nouveau Barbeque, seem to present a puzzling array of subjects and forms: portraits of old men, views of distant galaxies, sculptural grotesques, a copy of an iconic Symbolist painting hung beside a large spinning spiral, a scattering of life-sized walnuts, a mountain of over-sized muffins, a distorted photograph of a woman drinking tea and a video of a man scuttling like a beetle, knocking over furniture in a room. But it soon becomes apparent that each of Armanious' objects is the result of revelations that he has made while delving into the hidden potential of matter. Each image or form has come from the materials themselves, and this is largely what Armanious' work is 'about': a concentrated expression of the characteristics peculiar to the medium itself as it occupies space.

When Armanious arranges hairs on the surface of a small white canvas to make a face, as he has done for the four fantasy portraits in this exhibition, it is the length and relative curl of each hair he has selected (some are from his own head, some from the heads of his friends) that determines the character and particular expression of each face--like some strange echoing of DNA. When he combines the two component parts of expanding foam and the stuff begins to rise with a vigorous yeast-like action, Armanious makes muffins. With a plastic like PVC, he makes a series of dramatically grotesque sculptures whose ecstatic agitation and superfluid derangement is the perfect expression and demonstration of the high strength-to-malleability ratio of this contemporary wonder product. Armanious makes available to the viewer the pleasure and aesthetic dreamspace of each of his materials.

Occupying an entire wall in Armanious' exhibition are views of distant galaxies and nebulae, like astronomical photographs taken of outer space. These constellar images are made from the residue of paint remaining on sheets of coarse black sandpaper after the artist has scoured a white wall. After the scouring process, the loose residue is removed by repeated washing. The remaining patterns of white paint particles calcified through friction are shining figures against a coarse black ground. Armanious' sandpaper works are at once views of unfathomably large objects seen from great distances and the most meagre crumbs of familiar matter trapped in crevices close to us. Armanious' surfaces are typically three-dimensional. With his sandpaper works, he reworks the surrealist technique of frottage, creating visions of the infinite, expanding universe by modestly rubbing away at a wall.

As one goes more deeply into Armanious' phenomenology of materials, a conceptual chain of terms that appears frequently in his work opens up. It includes things that are not generally thought to be logically related. Decoration, humour, wordplay, luck, chance, dislocation and disorientation relate to the creative and imaginative impulses of his materials in a ciphered causal relation. All these things are perhaps best exemplified by the two moving works in the exhibition: In one, the viewer is invited to stare into a large, spinning spiral for a short duration and then look at a copy of Edvard Munch's painting, The Scream. Due to the retinal persistence of the spiraling movement, the picture plane of the painting warps and writhes as though it were a completely fluid surface. In the other work, a distorted video lens films the artist scuttling around the floor of a room knocking over furniture. Armanious shows us that to demonstrate the plastic qualities of the stuff of which the world is comprised—to make explicit how it adorns space—is to access its awesome beauty and to unleash the imaginative power within it. But, at the same time, he shows us how this privileged access to matter may be vexed if things are not quite right and, if this is so, the result may be troubling and somewhat uncomfortable.

—
Hany Armanious has exhibited extensively in Australia and overseas for over fifteen years. In 2001, his major installation work, Selflok, was shown as part of a solo exhibition at the UCLA Hammer Museum in Los Angeles and later at the Ian Potter Museum in Melbourne. In 1993, he was included in the Aperto section of the Venice Biennale. Other major international exhibitions have included the 1994 Biennale of Sydney and the 1995 Johannesburg Biennale. In 1998, Armanious won the prestigious Moet and Chandon Fellowship with his Untitled Snake Oil, a series of inverted wine glasses and coloured Hotmelt molds. Major public holdings of Armanious' works in Australia include the Art Gallery of New South Wales, Monash University, the Museum of Contemporary Art, Sydney, the National Gallery of Victoria, Newcastle Region Art Gallery, Queensland Art Gallery and the National Gallery of Australia. Overseas collections include Auckland City Gallery and the Dakis Joannou Foundation, Athens. Art Nouveau Barbeque is Hany Armanious' first exhibition with Roslyn Oxley9 Gallery.