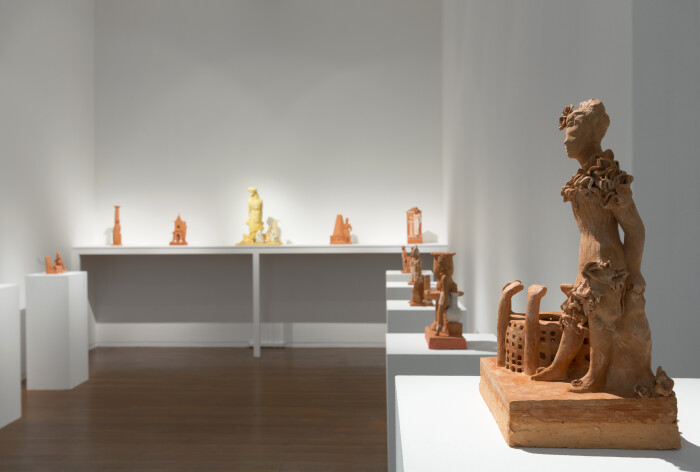 Modelling in clay is to the sculptor what drawing on paper is to the painter… In the soft clay the genius of the artist is seen in its utmost purity and truth...
—Johann Joachim Winckelmann, History of Art, 1776

With a delicate simplicity, Linda Marrinon models perfect forms in terracotta. Loyal to this most humble of sculptural mediums, Marrinon once again expertly handles anecdotes of Art History with playful jests from every-day in Architects! Terracotta! at Roslyn Oxley9 Gallery.

Espousing Wincklemann’s premise, with a purity of vision and a commitment to material, narratives on architecture and sculpture are rewritten by the artist. Through consistent use of this unpainted material, this fired clay or ‘baked earth’ tells a fascinating tale on architects and materiality.

Since ancient times, the economy of clay and its abundance has enabled it to produce everything from the very bones of architecture – bricks and tiles - to decorative interior elements such as statuary, reliefs and ritual objects. From the Renaissance to Canova’s sculptural reign of the late 18th and early 19th centuries, terracotta was central to sculptural practice and taught across Europe in the academies. In the subsequent centuries, terracotta was denigrated to objects of function or purpose - urns and pots, a far remove from its noble and religious origins. Today, in Architects! Terracotta! Marrinon reasserts its presence with a group of delectable sculptures.

Marrinon is calculated and utterly measured in her modelling. Each smirk, each fold of cloth is resolved and deliberate. For Marrinon, fired clay terracotta allows her to work in finer detail. The malleability of the material enables one to incise small minutiae, that are impossible in other mediums: stone and marble are too hard and plaster too vulnerable. The conclusions are these enchanting little monuments to architects and to terracotta.

In Architects! Terracotta! architecture is central. As if excavated from the depths of history books, these diminutive forms frame the curve of a figure against rigid architectural backdrops. The subjects vary, from specific architectural structures of Egypt to Greece, to symbols of East German Post-War communist power and a current day Australian sports field. With a nod-and-a-wink, Marrinon also gives life to buildings that were conceived but never built or architects who lost popularity. They range from  Austrian architect, Adolf Loos, whose Chicago Column never rose from the page, to American architect Frank Furness whose style went out of fashion, to exponents of French neoclassical architecture, Ledoux, Lequeu and Boullée, whose practice was halted by the French Revolution and who spent the rest of their days building with pen and paper.

Marrinon plays with the viewer. As she toys with material, her subjects jest with us. The ‘in-joke’ between subject, artist and material is ever enticing. We, the spectators, want in. The size of these charming characters enables us to establish an intimate relationship and a profound empathy. We want to protect them in all their fragility, to look after them and own them. To suspend these little pieces of history, these miniaturised vignettes in time.

During the 1980s Linda Marrinon embraced postmodernist theories to do with irony and mass culture by quirkily combining high and low art. She continues to playfully parody and pastiche the traditional canon of Western art history. She is a master of ambiguity. Her sculptures are at once an archetype and an intimate portrait – the specific employed in pursuit of the general. Marrinon’s works are often a meditation on character and the human condition; an invitation for introspection. Armed with technical brilliance, Marrinon is free to indulge in idiosyncratic proportions and the pleasures of the handmade.

Linda Marrinon has been exhibiting since the early 1980s and has been the subject of major survey shows at The Ian Potter Museum of Art, The University of Melbourne and The Institute of Modern Art, Brisbane. Marrinon has been included in numerous group exhibitions including, Australian Perspecta (1983 and 1999), Word (1999) at the Museum of Contemporary Art, Sydney, Lost and Found: the TarraWarra Biennale of Art (2009) and Figurative Sculpture at Monash University of Art (2016). A large group of Marrinon’s sculptures were included in the exhibition Making it New: Focus on Contemporary Australian Art at the Museum of Contemporary Art, Sydney in 2009. Marrinon’s paintings and sculptures are held by most of the major Australian state galleries and numerous private and corporate collections. In 2001, Marrinon was a recipient of the prestigious Samstag Fellowship which permitted her to study at the New York Academy of Art. In 2008 Chris McAuliffe authored a monograph on Marrinon’s work, Let Her Try, published by Craftsman House.

Linda Marrinon has been exhibiting with Roslyn Oxley9 Gallery since 1983.