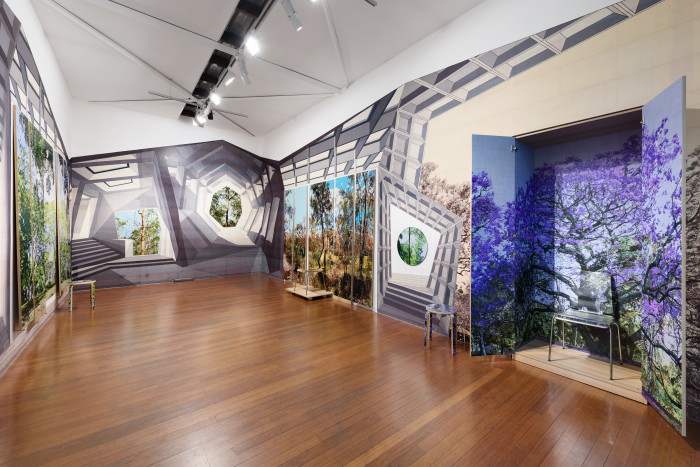 ARBOUR ARDOUR is the most recent in a series of room-based flourishes by Gary Carsley that contest among other things: the increasing correspondence between spectacle and material privilege in both art and life and the collapse of historical memory, with all of its attendant intended and unintended consequences. In these immersive environments, laboriousness can be best understood as a calculated expression of queer disruption; where perversely, manuality is a highly refined and conceptual act. Positioned within a multi-perspectival pergola elaborated by Architect Renjie Teoh around 3 IKEA PAX closets and a suite of geometrically shaped Draguerreotypes1 positioned by the artist as a series of outward looking windows and doors, ARBOUR ARDOUR is more than the sum of its parts. Liminal and latently lavender, this exhibition continues the artist’s engagement with the garden as a trans-cultural, temporally fluid stage where theory becomes practice.

Gary Carsley lives and works on Gadigal land where he maintains a small walled garden and a practice propagated at the intersection of the paradigms: artist, curator, writer and contrarian. His interest in the future of the past is located in the conviction that memory, particularly a deep historical understanding of the interconnectedness of all things, can be an affective site of resistance to the orthodoxies of the present moment. Carsley believes that the difficult, opaque, and the arcane are among the most effective strategies for contesting current inequalities; because critically, they are modes of enactment and not of representation.

For more than 20 years Carsley has been using sub-cultural performance genres like karaoke and ventriloquism as rhetorical models to investigate the complexities and contradictions of coloniality, outside the binary of victim and perpetrator. His current excavations into the alluvium of cultural and political memory include - unravelling the correlation between the perfection of linear perspective, the invention of whiteness and the theology of capital. Carsley works primarily with the garden as a civilisationally plural expression that reformulates concepts of nature and belonging, the secular and the sacred. His decades-long exploration of acculturated landscapes acknowledges that in an Australian context all such images simultaneously visualise possession and dispossession. Recent projects include Terra inFirma: Sovereignty and Memory, Blacktown Arts Centre, Sydney, 2020; Chromophilia, Institute of Classical Architecture & Art (ICAA), New York, 2020; the 9th Asia Pacific Triennial of Contemporary Art, Queensland Art Gallery | Gallery of Modern Art, Brisbane, 2018-19; The Regency Made Me Blind, National Gallery of Singapore, 2018; and The National: New Australian Art, Museum of Contemporary Art Australia (MCA), Sydney, 2017.

1 Draguerreotypes. A term coined by the artist’s friend, the curator and writer Rafale von Uslar in the 1990’s to describe the artists photogenia. A body of work considered by some a succubus on the somnolent form of the photograph and by others a queering of the word Daguerreotype, applied by the artist to the unique state, photo-based works he has been producing since 2000.