Angels, Mrs Peel, Maybelline and a Long Night of the Soul 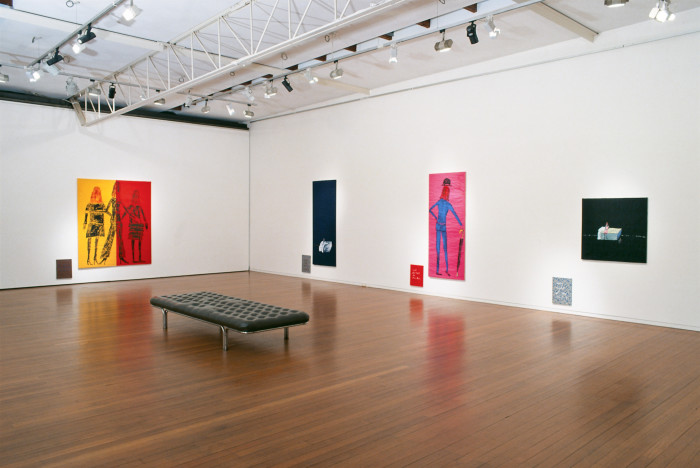 Jenny Watson's exhibition, Angels, Mrs Peel, Maybelline and a Long night of the soul, at Roslyn Oxley9 Gallery consists of five new paintings and their corresponding watercolour studies. Watson long ago dispensed with a conventional approach to painting. With the most simple elements—readymade ground, rudimentarily painted figures and fragments of painted text—Watson unveils an emotional interior. She constructs a portrait of the female artist subject but one which is open for general identification. In two works in this exhibition, she represents her self by analogy, using iconic images of female superheros from popular cultural sources. The invincibility of the Charlie's Angels and Mrs Peel silhouettes (from the 1960s television show, The Avengers) with their large scale and aggressive colours, is modulated by the small, pale and tragic figure of the Maybelline work. Two nocturnes, both titled A long night of the soul, present harrowed, soul-searched night travelers, solitary witnesses to dark self-truth. Together these works present a total portrait, full of contradictions and exposed fragility.

In 1993, Jenny Watson represented Australia at the Venice Biennale. She has been included in many important exhibitions internationally for over twenty years including Prospect 1993 at the Frankfurter Kunstverein, Popism, curated by Paul Taylor, at the National Gallery of Victoria in 1982 as well as numerous biennales. Watson has had longstanding representation with major commercial galleries in New York (Annina Nosei) and London (Gimpel Fils) as well as in Germany and Italy. In 2003 she had a solo exhibition at the Yokohama Museum of Art in Japan. Her works are held in every major public collection in Australia and many overseas collections. Jenny Watson has exhibited with Roslyn Oxley9 Gallery since 1982.