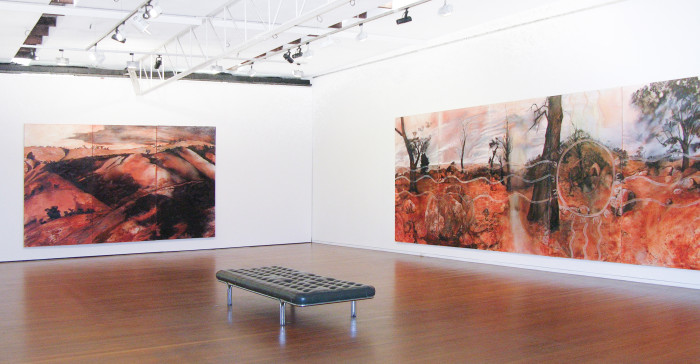 Mandy Martin is one of Australia’s most recognised artists whose work, particularly in the past couple of decades, has been increasingly involved with the environment and specifically with the manner in which people relate to their environment. Martin has been concerned with the landscape itself—the rivers and the deserts—as well as with the changing modes of its depiction.

In paintings, including the Strzelecki Desert series and the Salvator Rosa series, her preoccupation has been not only with the landscape, but also with modes of visualisation employed by artists to depict that landscape. By referring to Ludwig Becker and Salvator Rosa, she refers to whole systems of seeing the landscape and by revisiting the specific sites and their paintings of them, she creates images which are multilayered. We are presented with different ways of seeing the landscape within the one painting and meaning resides more in this juncture or the seams between the different systems, rather than in the overall impression. At the same time, they are visually very engaging paintings of considerable beauty and power.

In this exhibition Martin, in most of the paintings, has been involved in a collaborative process with Trisha Carroll, a Wiradjuri artist. Carroll is an emerging artist who lives in Billimari and teaches at Cowra and Canowindra and exhibits both in Cowra and Orange. Martin describes her new series of work titled Absence and presence as being “about inspirited places around where I live on the Central West, NSW”. She also cautions that where she and her collaborator have been working in the area along the Lachlan River near Cowra, to protect the sanctity of the sacred sites, the artists have shifted “their visual interpretations both mimetically and symbolically. In other words these works do not look like the actual sites or any nearby rock-art sites because both artists have disguised their identity”.

The paintings involve two overlapping systems of visualisation, one a western one drawing heavily on the Romantic tradition with references to the sublime as well as the picturesque Arcadia, the other, a specifically indigenous one with sacred symbols and in some cases the tracery of dot paintings. The late Lin Onus in a number of his landscapes in not a dissimilar manner overlaid some of his illusionistic landscape paintings with sacred rarrk patterns to suggest that the same area can be mapped from different cultural perspectives.

Martin and Carroll employ this strategy and adopt what could be termed a postcolonial stance where these systems are no longer in conflict but suggest the harmony of reconciliation. While within Australian postmodernist practice collaboration between indigenous and non-indigenous artists has become a common practice, too often it is a question of tokenistic supplication to official curatorial gods. Here the two artists express respect for the same landscape, but from their respective cultures and in the process create paintings of sombre beauty within generally a restricted palette of ochres, black and white.

Disclaimer: Mandy Martin and Trisha Carroll, a Wiradjuri artist, have been working in the area along the Lachlan Rivernear Cowra and any possible significant religious meanings of any of the sites they paint are protected by deliberately shifting their visual interpretations both mimetically and symbolically. In other words these works do not look like the actual sites or any nearby rock- art sites because both artists have disguised their identity.

Mandy Martin ﻿has been exhibiting her work in Australia and overseas for over twenty years. Her paintings are held by most state galleries as well as many regional galleries, corporate and important private collections in Australia. Overseas holdings of her work include the Los Angeles Museum of Contemporary Art and the Solomon R Guggenheim Museum, New York. She was included in the exhibition Federation: Australian Art and Society 1901-2001 at the National Gallery of Australia. Mandy Martin has been exhibiting with Roslyn Oxley9 Gallery since 1983. Absence and Presence will be her eleventh solo exhibition with the Gallery and her first collaborative exhibition with Trisha Carroll.