A Darker Shade of Dark 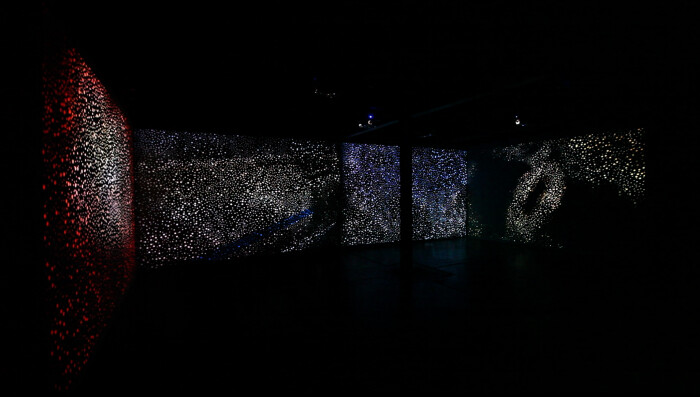 The paintings in A Darker Shade of Dark, are History Paintings – scenes and objects with cultural, personal and art-historical significance: a Mapplethorpe portrait of Grace Jones covered in body paint by Keith Haring; a view of Pentecost Island in Vanuatu where Boyd’s great great paternal grandfather was from; an Oceanic stick map from the British Museum; a sculpture from Vanuatu that was bequeathed to Picasso after Matisse's death; a kangaroo skull collected by Joseph Banks in Cooktown and depicted in a watercolour by Nathaniel Dance; a self-portrait of Matisse.

Boyd’s subject matter reveals an underlying theme of inheritance, in particular the inheritance of primitivism and its influence on Modernist aesthetics. The disparate subject matter is brought together as a mapping of 'forefathers': Matisse, Picasso as well as Boyd’s great great paternal grandfather who was brought from the island of Pentecost to Queensland as a slave in the sugarcane fields. These progenitors – both artistic and genetic – are linked in the exhibition by the sculptural figure from Vanuatu (then New Hebrides) that was in Matisse's private collection and given to Picasso after Matisse's death. Two of the paintings in Daniel Boyd’s exhibition include details from a photograph documenting the handing over of the object.

The selection of images connects this body of work with the tradition of History Painting that Boyd engaged with more literally in his earlier “pirate paintings” referencing Colonial portraiture. But whereas History Painting typically depicts a clear moment in a celebrated narrative, Boyd’s veil of transparent dots only partially reveals stories. The negative space surrounding the spherical marks enacts a reduction of information in the breaking down of the image, a kind of metaphor for the effect of time and memory on the narratives that surround objects and images, and an acknowledgment of stories lost in Colonizers’ versions of history. Boyd’s use of dots recalls the tradition of Papunya Tula painting, but his technique is almost more indebted to the histories of Pointillism and Impressionism. Boyd notes that “the convex nature of dots allows light to move across the images to create a shimmering effect.”

The mesmerizing effect of dots en-mass is further investigated in Boyd’s four-channel, floor-to-ceiling video projection, A Darker Shade of Dark 2012. Shimmering fields of coloured dots drift between what appears to be moving abstract images and figurative ones. The subject is dark matter, particle physics and indeterminate cosmologies. The soundtrack, commissioned for the work, is somewhat psychedelic and adds to the mystery of the work. It is dreamlike, cosmic and difficult to pull oneself away from.

Daniel Boyd has been exhibiting his work nationally and internationally since 2005. In 2011 Boyd completed a residency at The Natural History Museum, London which held a solo exhibition Up In Smoke Tour. In 2007 Boyd was selected for the first National Indigenous Art Triennal, Culture Warriors, curated by Brenda L. Croft at the National Gallery of Australia, Canberra. This significant show has since toured to the Art Gallery of South Australia (2008), the Art Gallery of Western Australia (2008), the Gallery of Modern Art, Brisbane (2009) and the Katzen Arts Center, Washington DC. Other group exhibitions include: Octopus 9: I forget to forget, curated by Stephen Gilchrist, Gertrude Contemporary Art Spaces, Melbourne (2009); Contemporary Australia: Optimism, Gallery of Modern Art, Brisbane, Queensland (2008); Lines in the Sand-Botany Bay Stories From 1770, Hazelhurst Regional Gallery, Gymea (2008); If you see something say something, Gallery 4a, Sydney (2007); Right Here Right Now, National Gallery of Australia, Canberra (2006); and From the Edge, Wagga Wagga Regional Gallery, and the Ivan Dougherty Gallery, UNSW, Sydney (2006). Boyd’s work is held by the National Gallery of Australia, Canberra, the Museum of Contemporary Art, Sydney, the National Gallery of Victoria, the Tasmanian Museum and Art Gallery, as well as numerous private collections nationally. A Darker Shade of Dark is Daniel Boyd’s second solo exhibition with Roslyn Oxley9 Gallery.﻿